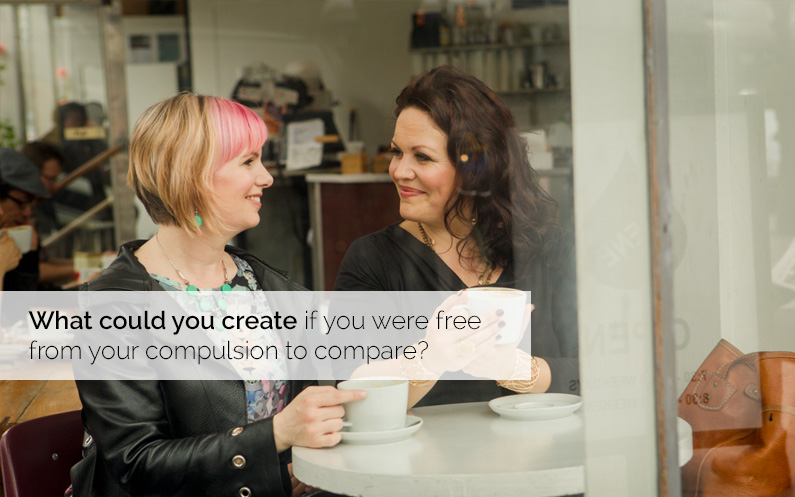 In the fall of 2013, I had a conversation with Tanya Geisler that turned into a year-long collaboration. Both of us are leadership coaches; both of us have worked extensively on impostor syndrome; and both of us want passionately to see a world where people’s inner critics stop holding them back from creating, stepping forward, and leading the lives they really want to live.

What emerged that day was a mutual realization that there was a deep habit underlying many people’s experiences with the inner critic and with impostor syndrome – the habit of chronic, compulsive comparison.

What could you create if you were free from your compulsion to compare?

I’ve come to see comparison as a three-dimensional thing:

We compare up (looking to heroes and role models, deferring to authority, and so on) and we compare down (judging and disdaining others, claiming we’d never sink so low).

And we experience comparison both from the standpoint of the person doing the comparing, and on the receiving end, where other people project their dreams and fears on us, placing us on pedestals or using harsh, personal criticisms. Either way, they are attempting to put us in our place.

It’s a complex system, and however you experience it, it holds many of us back.

It holds us back from creating.

It holds us back from stepping into leadership.

It holds us back from expressing ourselves fully.

And that’s unacceptable to me (and to Tanya). So we’ve spent the last year designing a digital program for transforming your relationship to comparison – moving it from chronic compulsion to conscious awareness, from something that blocks you to energy that can move you forward along your own path, whatever that looks like.

I’m deeply proud of this work. And I’d love for you to experience it, if it calls to you.

You can do the program as a solo pursuit, or in a group – your choice. It’s totally self-paced. And those who’ve had early access are calling it “powerful,” “transformative,” and “substance served up right.”

Here it is: Beyond Compare.