Public Triumphs, Personal Failures: What Lauren Bacall taught me about telling the truth 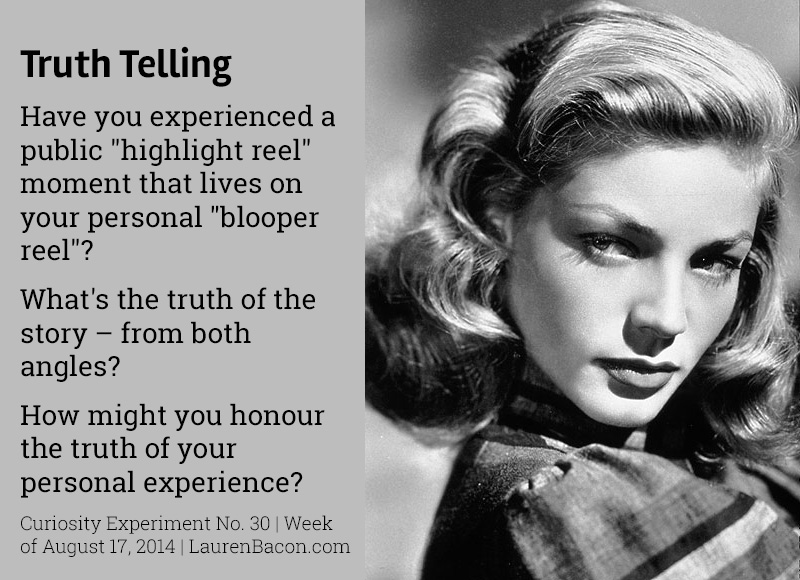 I didn’t meet another girl named Lauren for the first ten years of my life. As far as I was aware, the only other Lauren worth noting was Lauren Bacall, the husky-voiced, sophisticated – some would say impeccable – Hollywood star.

I wasn’t named after her exactly; my parents always said they “just liked the name.” But who else was there to consider as my namesake? So privately, I adopted her as a sort of role model – my idea of what a grown woman named Lauren ought to be like. (Never mind that no one but the audience ever called her “Lauren” – I didn’t catch on to her real name, “Betty,” until I’d placed her firmly in my personal iconography.)

As I grew older and learned more about her, I discovered to my delight that while she was indeed glamorous, she wasn’t one to mince words or gloss over life’s hardships. Her autobiography, By Myself, detailed the loss of her first husband, Humphrey Bogart, in aching detail; she recalled her earliest on-screen experiences with unflinching honesty; and she harboured no illusions about Bogie’s shortcomings, or her own.

Her death last week brought to my attention a Vanity Fair article in which Bacall describes the honorary Oscar she received in 2009 with disgust: “Every time I look at it, I remember that day, and I think it was probably the worst thing I have ever done. What should have been one of the best days in my life is one of the worst.” Why? “Because I only talked about Bogie,” she says. “My three children were sitting out there, and I never talked about Jason [Robards, her second husband], and I never mentioned Sam, my youngest child. […] I think that’s about as bad a thing as I’ve ever done.” It’s a moment many would consider a professional triumph, but in her eyes it was a very personal experience of failure.

While it’s terribly painful, I love her for telling the story. I find myself wondering whether I’d have the courage to tell a reporter about the pain behind a moment that seemed shining and golden to the general public. Could I – would I – stand in my own truth and firmly say, “No, I can’t see that moment the way you might, because it represents a betrayal of something I held dear”?

“I believe in the truth, and I believe in saying what you think,” writes Bacall in her memoir. “Why not? Do you have to go around whispering all the time or playing a game with people? I just don’t believe in that. So I’m not the most adored person on the face of the earth. You have to know this. There are a lot of people who don’t like me at all, I’m very sure of that. But I wasn’t put on earth to be liked. I have my own reasons for being and my own sense of what is important and what isn’t, and I’m not going to change that.”

Good on you, Betty. Thanks for standing in your truth.