The Difficulty with “Social Innovation”

I run in circles where the phrase “social innovation” gets bandied about a fair bit. It’s one of those catchphrases that gets used to mean a lot of different stuff – and depending on the context and the person talking about it, I can feel anywhere from deeply identified with – and passionate about – the idea, or like it borders on being so flexible in meaning that it’s virtually meaningless.

One of the things that worries me a little is that when I hear people talk about social innovation, I don’t hear much about what seems to me to be its precursor: community economic development. I have an aunt in northern Ontario who teaches CED at university, and we had a conversation once where I asked her what the difference was between social innovation & CED.

Her response was: “Good question!”

She didn’t go so far as to badmouth the social innovation trend, but she did point to something I’ve noticed, too, which is that “social innovation” proponents seem relatively unaware of the CED movement.

In Canada, at least, I find myself wondering if this is another example of the gap between urban & rural communities. This map of social innovation in Canada shows a familiar pattern, with organizations crowding the 49th parallel; the little green flags helpfully indicate the major urban centres across the country, with nary a rural presence to be seen, unless you scroll way up north to the territories. 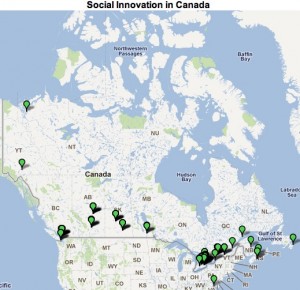 I want to be clear – this is a topic I know little about, though I’m very interested in it. I intend to read up on it some more so I can speak to it with greater authority. But I’m very curious about whether an urban/rural split exists in the social innovation movement, and what – if any – the intersections are with the CED movement. I hate to think that the two communities are working separately from one another, though as a city slicker with roots in the country, I am well aware that there are two very different landscapes in this country when it comes to innovation, entrepreneurship and definitions of community.