The Rebel Grandma: What my grandmother taught me about sex, love, and loneliness 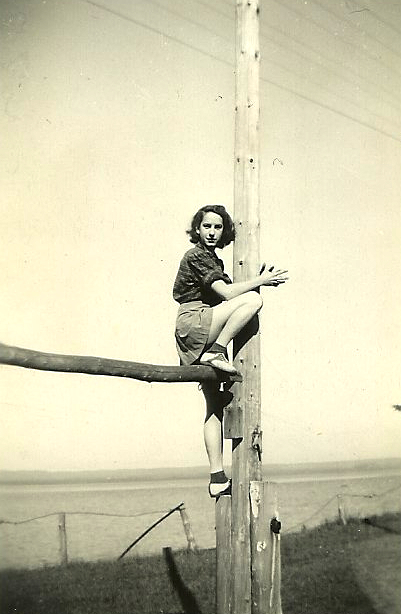 Years ago, I attended a ceremony to bless a mother-to-be. And the powerful woman who led the ceremony asked us to gather in a circle and introduce ourselves with our matrilineal heritage.

As we went around the circle, I saw a few tears as each of us felt the power of naming our grandmothers and calling them into the circle – this circle of women who were assembled to bear witness to a woman at a threshold. The power of acknowledging the women who had borne us.

Have you ever done this? Give it a try. (It might feel awkward. That’s half my point.)

My grandmothers were both named Eleanor. And they lived very, very different lives. Today I’m going to write about my maternal grandmother.

Eleanor MacLeod, nee Darou, was born in May 1925 to a jeweller in Sault Ste Marie, Ontario. She married my grandfather, a farmer of limited means, when she was just nineteen years old; he was eleven years her senior, ruggedly handsome, solid, honest and hardworking. They were deeply in love, so much so that she defied her parents’ wishes and faced down her father’s stormy disapproval to marry the man she’d chosen. Grandpa – Gordon, to her – was her grand romance and he would remain so all her life.

They were playful and flirtatious together. She gave birth to eight children by him (and that’s not counting the pregnancies that ended in miscarriages). She moved away from the comforts of the city, to a tough, farmer’s life with no electricity, indoor plumbing, or nearby neighbours to whom she could turn for socializing. (She’d been very outgoing back home, and craved company.) And she, the only girl in a family of boys who’d all gone to university, chose a life with very limited options for intellectual stimulation. She wrote a social column for the weekly community paper, which catalogued the quotidian lives of its readers: So-and-so’s daughter had given birth to a healthy baby boy in Sudbury, or such-and-such’s son had been up to visit from Toronto.

I remember her quilting, her throaty, earthy laugh, and her temper.

She was prickly, my grandma MacLeod. Not the bosomy, sweet grandmother of picture books. She was quick to kick us all out of the house and into the surrounding fields when she was sick of our childish noise. (“Go on and let the stink blow off!” she’d yell.) She tore around the house like a drill sergeant, hollering commands to her army of children and grandchildren. And she was quick to judge anybody who didn’t see the world the way she did.

She was a terrifying presence at the card table, as well.

To be honest, my grandfather was a far easier person to feel close to. Grandma always seemed harried, and a little crotchety. But she had her moments of greatness.

I loved the way she was with my grandfather. She showed me what lifelong romance looked like. The way her eyes sparkled when they landed on him. The way she’d say, “Oh, Gordon,” when he made her feel special. (I imagine she sounded exactly like that at eighteen and nineteen, sneaking off to go to a dance with him.)

I loved her frank appreciation of sex. (No matter how modest you are, you can’t live on a farm without encountering sex as a basic fact of life on a near-daily basis.) My grandpa gave her a new set of bedroom furniture for their anniversary one year, and he must have been in his seventies, but it was clear by the way their eyes danced over the bed frame that the two of them had plans for it. My mother remembers her mom volunteering to take all the girls in the community to the city to see Blue Suede Shoes, the Elvis movie none of the other mothers approved of because of his wild hips. And one of my favourite memories of grandma is watching her unveil a gag gift she’d made for one of her sons-in-law, a master of lewd and crass humour who also enjoyed cooking: She’d quilted him an apron with a pleat down the middle that hid a lovingly hand-quilted cock and balls. (Yes, really.) I don’t know who laughed harder, the giver or the recipient. But I knew that day that I’d come by my sense of humour honestly.

And while she was conservative and very set in her ways, she had a profound pragmatism that always won the day – so when my mom told her that the reason she and my father were divorcing was that my father was gay, Grandma’s response, after a brief pause, was, “Well, I guess we have to just accept it and move on.” No wallowing in moralism or self-righteousness, there.

She was demanding, and sometimes slightly surreal in her inability to do things that any other farmer’s wife would consider essential. She was a terrible cook, an even worse money manager, and loathed housework. We had an epiphany once and asked her if she’d had servants growing up. “Of course,” she answered lightly. It explained so much that we’d never understood previously. No wonder she didn’t know how to cook or clean – other people had always done it for her. Yet she chose a life where she had no helpers apart from her husband and children. Needless to say, her kids remember her as a bit of a tyrant.

She was also bipolar, and had terrible lows and highs, both horrible in their own ways. She was on meds most of my life, but went off them occasionally and would fight hard against going back on them.

My grandmother MacLeod taught me a lot.

She taught me that love really can conquer all. She sacrificed a lot to be with my grandfather, and I never once heard her frame it that way. She’d chosen the love of her life, and that meant everything to her. The little things – education, career, money, the comforts of home – shrunk in importance.

In her unwavering pragmatism, she taught me that when in doubt, it’s best to begin by putting one foot in front of the other.

She taught me that all of us have a right to pleasure, carnal and otherwise.

She went her own way and didn’t give much of a hoot what other people thought of her.

She also modeled for me some things I didn’t want for myself:

While her love story with my grandfather was very romantic, I thank heaven every day that I never had to make choices like hers. The day I learned that her father forbade her to go to university, even though all of her brothers had gone, I learned a lot about what a difference fifty years can make. I often wonder whether she’d have been happier and easier to love if she’d had more options in life.

She never let us get close to her, emotionally. I wish I’d seen her open and receptive once in a while. Observing her whirlwind of constant activity and frequent criticism of her family was a good reminder to lead with love and listening.

As she aged, she grew more and more lonely, because her friends were dying and she pushed prospective new friends away. While I sympathize deeply with her grief for her lost friends, I know that her latter years were far more isolated than they had to be, because of her refusal to accept newcomers into her circle.

There’s a moment I’ll always remember. I was back on the family farm for a visit; I was in my early twenties, pursuing a music degree, and I remember feeling like my everyday life was so far removed from life on the farm that it felt nearly impossible to bridge the two. I knew my grandmother had no real way to wrap her head around the life I’d chosen, from its deep city-centricity (if that’s a word) to the highbrow culture I’d chosen to immerse myself in. I had found it difficult to connect with my grandparents on this trip, because I didn’t know how to communicate what I did in terms they’d understand, and I knew it must be obvious to them that their world was equally foreign to me. My mother had been the only one of her siblings to move away, and I felt like I had compounded that distance by not only living across the country, but in a different world.

I was getting ready to leave, standing in the driveway in front of the small, one-story farmhouse, after packing my bags into the trunk of the car. I turned back to my grandma and grandpa, and they hugged me goodbye. And Grandma leaned forward and tucked several folded bills into my pocket, wordlessly.

They didn’t have money.

They had twenty grandchildren.

And they were giving me a hundred dollars.

I gave her a look. Come on, Grandma. I can’t take this.

“I don’t get to buy you all the things I buy for the other kids,” she said, with wet eyes. Meaning the kids who’d stayed close to the farm.

I thought about what I’d buy with it. Certainly nothing she’d choose for me. Maybe some CDs or sheet music. Maybe some more black, gloomy clothes. She didn’t mind what I did with it. She wanted me to have something she wouldn’t pick out.

It was too much, and it was sweet, and it was as sentimental as my grandma ever got with me. And that’s just fine by me.