Moms Like Crosswords, and the NYT is ON IT.

As an avid NYT Crossword aficionado, you can probably imagine the delight with which I opened your email with the subject line, “Announcing the Mother’s Day Collection.” The thought sequence sparked by that subject line alone went something like this:

See all of those exclamation points? I was that excited.

Then I opened the email, and my anticipation built further. Right there, below the admittedly somewhat odd photo of someone doing a crossword on their iPad (with what looks like a white dude dancing badly in the background), there was a sweet line of text:

Aww! NYT Crosswords marketing team, you rule! I feel so appreciated. And I can’t wait to see my bonus crosswords. What a fun and unexpected way to thank your loyal, paying subscribers.

Obviously, I hit that “Learn More” button immediately. And I was rewarded with… so much disappointment. 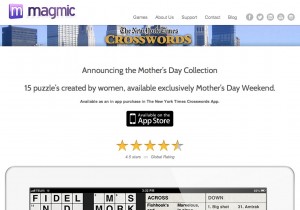 I mean, first of all, what is up with that glaring apostrophe in “puzzle’s”? Holy moly. Know your market, people. We are word nerds.

But above and beyond that, I have several beefs with you now.

One: You want me to pay for this? All of a sudden, I feel totally cheated? You led with gratitude – you said “thank you” – and then you followed up with a crass sales pitch.

Mothers don’t give gifts on Mother’s Day; we receive them in thanks for all the stuff we do for you the rest of the year. Come on.

Would you send me a birthday package on my birthday that cost me money? Well, maybe you would, but that’s why you’re going on my blocked senders list.

Two: Where do I even start with the fact that your Mother’s Day collection is comprised of “15 puzzles” (I can’t bring myself to replicate that typo again) “created by women, available exclusively Mother’s Day Weekend”?

OK, it’s cool that you’re featuring women puzzle creators, but why do they get crammed together for Mother’s Day? Are they all mothers? Are “women” and “mothers” equivalent words? (I mean, I know “female rocket scientist” and “maker of the best beef stroganoff” are synonymous to you, but have you learned nothing?)

Couldn’t you make an International Women’s Day puzzle pack instead? Even that would bug me a bit – why should we only be able to buy the women’s puzzles for 2 days, rather than 365 days a year? – but it would at least make more sense. These aren’t motherhood-themed puzzles, or puzzles by mothers, so I just don’t get it.

(Part of me also wonders how much one earns from designing a NYT crossword, and I have to imagine it’s not a particularly lucrative project, which then leads me to wonder if downloading this puzzle pack for $0.99 is just going to make me feel icky about all the underpaid labour these women performed.)

I know what you’re going to say: It wasn’t you; it was the corporate partner who built the app. But they’re representing the New York Times, and they’re doing a poor job of it.

Let’s bring the standards up a bit.

P.S. Did I mention I’m a paid subscriber to your app? That’s how much I love you. Please do better next time.

A shout-out to the completely awesome @NYTOnIt for the title inspiration.