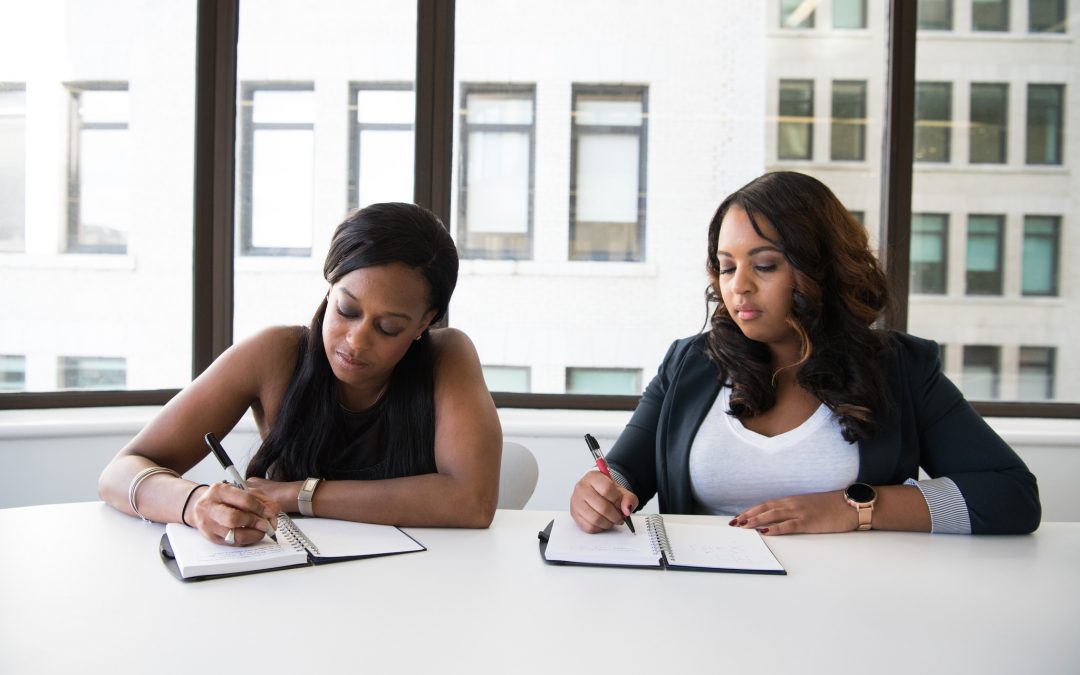 A lot of people will tell you that business partnerships are like marriages. They’re right, in many regards: they’re a long-term commitment; the best ones are built on a foundation of deep trust, openness and respect; and you end up spending an immense amount of time together, so if you don’t like each other an awful lot, they tend not to end well.

At worst, they go down in flames. And the fallout from a bad business breakup can be miserable: unmet expectations, resentment, one person running off with all the money… basically, all the worst aspects of those group projects you had to do in school, except with cash and public reputations at stake. (I could tell you some horror stories, but that’s not the point of this post.) At best, though, you gain an expanded skill set; creative give-and-take; an expanded network; and perhaps the most under-appreciated upside, camaraderie as you build, succeed, fail, and bounce back together.

So how do you maximize the upsides and minimize the risks of the whole thing falling apart? As someone whose career has featured more than a couple of partnerships and collaborations, I’ve learned there are a few key questions to answer if you want to enter into a business arrangement with clarity and confidence, beginning with one you must answer for yourself:

1. How much psychological safety exists here?

MIT Sloan School of Management professor Edgar Schein coined the term “psychological safety” to denote a quality that Google and other companies have discovered is foundational to team success: it’s a “shared belief held by members of a team that the team is safe for interpersonal risk-taking,” and “a sense of confidence that the team will not embarrass, reject or punish someone for speaking up.”

When you’re considering making a serious commitment to a business colleague, this is the first and most essential question to consider. If your answer isn’t an enthusiastic one, you may just need more time to build trust, or it could be a serious red flag.

If you think it might be a red flag, do not pass Go, and do not invest $200 (or $200k). And if you need to build more trust, consider making a short-term, temporary commitment instead: sign on for a joint project that will allow you to test the waters.

On the other hand, if you’re confident that you and your prospective collaborator score high marks for psychological safety, then it’s time to sit down together and explore some deeper questions. 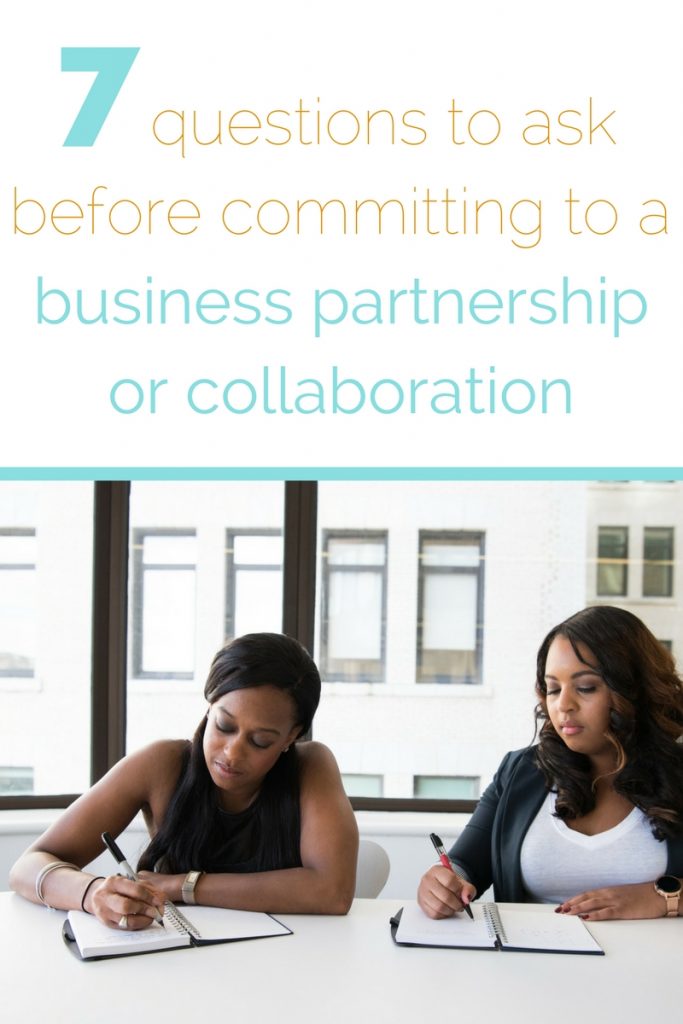 There are two layers to the discussion: figuring out the logistics of working together, and gauging how much ease and flow exists between you.

A note on process: You might not want to tackle all of these in a single session, but I definitely recommend discussing all of them. Set aside a generous chunk of time, pair with food and/or a beverage of your choice – personally, I think nothing beats doing this over a glass of good red wine or a cocktail, but that’s just my taste – and take turns asking and answering.

Remember: if you encounter any surprises that give you a sinking feeling, that doesn’t mean you can’t collaborate on something short-term and well-defined. And it certainly doesn’t mean you can’t remain friends. It just means that you’ve identified important concerns that need to be addressed before making a bigger commitment. This is a good thing! It’s like the “Do you want kids?” conversation; if you have different answers to that question, then you either have some intense negotiations ahead, or you know to save yourselves further heartbreak by stringing each other along.

OK, on with the questions.

2. What is our shared purpose?

Have you taken the time to articulate your common vision, and make sure you’re both on the same page? If not, now’s the time.

I can’t tell you how many business partnerships I’ve seen go south because the partners had different ideas about where they wanted to go, but just assumed they were on the same page. And I don’t mean shared goal, as in the concrete thing you’re building; I mean, what do you want the impact of that achievement to be? Where do you want it to take you?

3. What skills and resources do each of us bring to the table?

If you were an heiress and you were getting married to someone of modest means, someone in your circles would advise you to sign a pre-nup. And in business partnerships, the same principle is true when it comes to financial investments. But when you’re dealing with intangibles – the size of your mailing list, say, or the fact that one of you has ten years’ experience to apply to building and coding the app you’ve dreamed up together while the other is just starting to teach himself to code – it can be harder to quantify.

Nevertheless, if you want to avoid resentment and difficult conversations down the road, it makes sense to make an inventory of the resources you’re each bringing into the collaboration, and having a frank discussion of the implications for how you’ll be proceeding. You might decide to adjust the distribution of profits or shares to reflect the difference in investment. (For more on that, see Question 7.)

4. What roles and responsibilities does each of us want to take on?

This is often one of the first conversations that takes place between prospective collaborators – “I could do this, and you could do that, and together we’ll take over the world!” – but it’s worth spending some time itemizing all of the work that needs to get done in order to reach your initial goals, and who’s going to do what (and what, if anything, you want to outsource).

This is your chance to be 100% clear about what you’re most excited about doing, what you’re willing to do short-term or in a pinch, and what stuff is totally out of your wheelhouse. It should be a clarifying, trust-building, and energizing conversation.

5. What does success look like for each of us?

What kind of financial return do you need in order to call this a success (or at least, not a complete failure)? What returns would constitute exciting levels of success? What are some other measures of success – such as gaining experience & expertise, exposure, etc.?

And if this thing takes off, what’s your dream scenario? Is it short-term or long-term? What would growth look like? What else do you picture in your mind’s eye when you think about a successful outcome?

6. How much time and energy can each of us commit to this project?

An overly-optimistic answer to this question has sunk many otherwise promising partnerships. Think back to those group projects in school: remember how much last-minute scrambling you had to do when other people mismanaged their time? The worst.

Nobody wants to be the one pulling all-nighters to make up for someone who over-promised and under-delivered. And nobody really enjoys being the disappointer, either.

So be realistic – cautious, even. What can you truly commit to? Give that. And listen for potential mismatches between the needs of the project and your capacity to work on it.

7. What does a fair and equitable distribution of shares (or share of revenues, if you’re not going to incorporate) look like?

For this, you’ll want to think hard about the relationship between each person’s skills, time commitment, the resources they bring, and what they’re expecting to get out of it. (Notice how I’ve been cueing you up for this with the preceding questions? Soooo sneaky.)

This can be a minefield of a question, so I suggest tackling it this way: first, start by considering what you think is a non-negotiable percentage for the other party. What’s the minimum you would consider fair, given what they’re contributing to the partnership? Next, what’s the most you can imagine offering them, without feeling like you’re giving too much away? Now you’ve got a range in mind.

Then do the same for yourself: what’s the low end of your comfort zone, and what’s the high end?

Once you’ve both taken this approach, write down your numbers and show each other what you wrote. Odds are, if you’re simpatico, your ranges will be pretty similar, and you can negotiate within a pretty narrow window, which should minimize your discomfort. And if it turns out you’ve written down very different numbers, then that’s fodder for a bigger conversation about assumptions: go back through the preceding questions and make sure you’re 100% clear on what each partner intends to contribute.

While this conversation may seem tricky, my bottom line is that the people I do business with must have clear boundaries, and be able to speak directly about what they want out of the relationship, while respecting my needs as well. That doesn’t preclude having an emotional and intuitive layer to the relationship, but it does mean taking the time to communicate clearly and to be clear about what’s entailed in making a business partnership work.

And there are two layers to the discussion: the surface layer, where you’re answering questions and getting clarity on what each of you is contributing and expects to take away; and the emotional/energetic layer, where you’ll be sussing out how easy it is to talk about these kinds of things, and whether the discussion is respectful, positive and generative. You want both things in any business partnership: clarity on the logistics of working together, and ease and flow in the relationship between you.