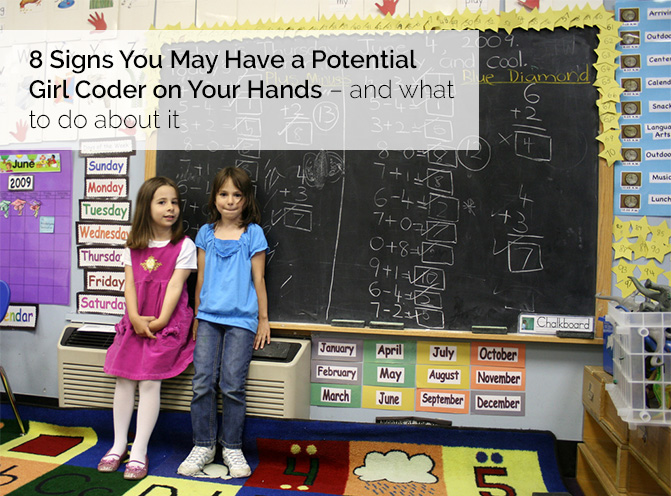 Girls & women are underrepresented in technology – in part because we don’t recognize & encourage their coding potential. Here are some signs to watch for.

A few months ago, I asked our kid’s fourteen year-old babysitter about her favourite subjects in school. “French, Spanish… and math.”

A blank, silent stare. “Uh… like, computer stuff?” she asks.

A slow shake of the head.

“Well, if you enjoy languages and math, you might find coding really fun. It’s kind of a combination of both.”

I’ll spare you the rest of the rather awkward conversation that unfolded, but here’s a bit of context: This girl attends a great school – one where the computer science teacher is famous for having turned down a job at Google to continue teaching high school kids. She’s a very good student, bright and diligent. Her stepdad is a gadget hound who dabbles in electronic music and graphic design. She lives in a city with a significant high tech presence.

She isn’t surrounded by coders, though, so she has no idea what they do – and merely the vaguest awareness that they exist. But she has plenty of opportunities available to her, should she want them. Coding – and IT work in general – is one of the fastest-growing job market segments out there, and it pays very well. But it has a serious pipeline problem: girls and young women aren’t finding their way to computer science programs (at least in the West – it’s a different story in India, China and other parts of the East), and one of the reasons for that is that the adults around them have cognitive biases that make us less likely to recognize coder potential in girls than in boys.

Making stuff: it’s what technology is supposed to enable, yet far too often, we think of technology aptitude in terms of passion for creating technology, rather than passion for creating with technology. That’s what’s happened in our home, where the de facto division of sibling identities has led to defining our son as the techie, and our daughter as the artist. That’s fine when you’re in elementary school, but project those identities out twenty years, and he’s likely to out-earn her several times over.
–Alexandra Samuel, “The 4 Words That Can Ignite Your Daughter’s Future Tech Career“

Putting the Pieces Together

The story of how I learned to code is pretty typical: I stumbled into it. I had a (male) roommate-slash-best-friend in university who knew how to do it and offered to teach me how. A few months later, I was earning a bit of extra cash as his code monkey. Then he started a company and I was his first hire.

I was in my mid-twenties, and until I learned to code I hadn’t had a clue what my path ought to be. When I look back on my earlier years, though, with an eye to spotting the clues that I would find my way to coding, here’s what I see:

Now, I know plenty of coders who would give you an entirely different list of traits and aptitudes, but the big aha for me about all of this is that not once, until I was in my mid-twenties, did anyone look at me and say, “Hey, you should learn to code.”

And yet, when I look down this list, I see a series of clear connections to my coding career, and why I enjoy working in tech.

So what can parents, teachers, and babysitter-hiring-busybodies look for as we work to encourage more girls to explore coding? I’d suggest we start by keeping our eyes open for girls who:

(Notice anything missing from the list? I’d love to hear your suggestions. Also, see below for an alternate version of this checklist framed from a girl’s standpoint.)

I don’t intend this as a yes/no checklist – more of an “if you answered ‘yes’ to three or more of these questions, you might enjoy learning to code” kind of thing. But I hope you noticed that nowhere on this list is feeling an inextricable bond with a laptop, or identifying as a geek. The clues we look for in boys don’t necessarily apply to girls (or, frankly, to many boys either), and they needn’t define our notions of what a future coder looks like.

Where to Point Your Girl Coder

Now, once you’ve spotted a potential girl-geek in the making (though you may want to avoid labelling her a “geek” to her face), how can you introduce her to coding? I’ve got a few ideas for that, too:

Most importantly: cultivate your awareness of your own biases, and work at overcoming them. We have a tendency to encourage girls more towards disciplines like health and liberal arts, as well as into “helper roles” within other disciplines. But if we want our girls to expand their horizons, we need to expand ours, too.

P.S. If you’re a high school Computer Science teacher, NCWIT has a great resource on recruiting young women into your classes. (They also have stuff that could be helpful for guidance counsellors, parents or other teachers.)

P.P.S. As I was working on this post, a friend shared a link to this horrorshow of a Barbie book. Lest we forget what we’re up against.

In Their Own Words: A Checklist for Kids

Many thanks to Sarah Worthy for reframing my “8 things” list as though it were written from a girl’s perspective – I recommend running this past the girls in your life and seeing how they respond.

Photo: Math problems for girls, by WoodleyWonderWorks (Flickr). Thanks to my friend Luke Closs for the app and game suggestions.